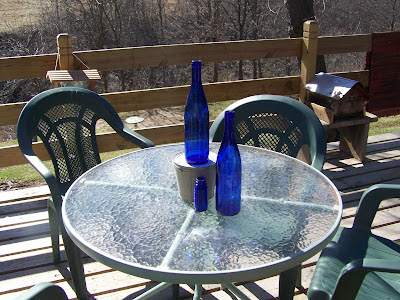 What is a bottle bush, and why would I want one?

There is a photo of one on Flickr that is a very good example. And here is another on Gardenweb.

Now, why on earth would anyone hang blue bottles on trees and bushes?

According to folklore, especially in the American south and the Caribbean regions, bottles were placed in trees to ward off evil spirits. According to some people, the spirits would get trapped in the bottles and not be able to get into your house. Blue bottles were thought to be the strongest deterrent, because blue, apparently, is considered a strong color against evil. But the trees were often decorated with green, brown and clear bottles too. According to the excellent article at Hill Country of Monroe Mississippi blog, Eudora Welty described bottle bushes in her story Livvie.

The Tuscaloosa News online has an article and video about Cindy Norwood, who has a large blue bottle bush tree in her yard. According to the article, the practice is of African origin, which seems quite likely given the prevalence of the bushes in the south.

That same article cites noted Alabama storyteller Kathryn Tucker Windham's book of folklore as a source of information about the blue bottles tradition. I first heard about the blue bottle bushes from Kathryn at a storytelling event and the idea has intrigued me ever since. After seeing my storytelling friend Donna Wilson's bottle bush, I decided it was time to start collecting bottles for my own bush.

The tradition has made its way north, at least as far north as Maine, where writer Tom Seymour had this information about bottle bushes (along with photos of his own bottle trees: "Bottle trees (Silica transparencii, according to famous horticulturist Felder Rushing) have a long and somewhat ambiguous history. The bottle tree is said to have originated in the slave-holding south, where Africans placed bottles on tree limbs in order to trap evil spirits. One legend tells that the people would place corks on each bottle in the morning in order to trap spirits trapped during the previous night. Then they would throw the bottles away.Another tradition suggests that the morning sun would instantly dissipate any trapped spirits. And yet another story says that wind, blowing across the lip of the bottles, would scare away any spirits. A variant on this proclaims the whistling to be the sound of the unhappy, trapped spirits."

In the Far East, a Korean folktale includes magical blue and red bottles that are hidden inside gourds. Did the African bottle lore inspire that story too, or did the idea of magical bottles actually originate in Korea and surrounding areas?

Sliding slightly from the bottles themselves to the word bluebottle, the Orkneyjar site offers insight into the bluebottle fly, and left me wondering if the fly's name originated from its being trapped in the blue bottles on bushes? Questions, questions--that is what I find so intriguing about folklore: the questions as to why people believe and do the things they do.

Here are some other sites with additional information about bottles and bottle bushes/trees:

A review of a collection of Jamaican tales called Skin Folk notes than in one tale, blue bottles hold the spirits of the dead, and if the bottle is broken the spirit will return.

A recipe for seeing the fae folk includes using a "special bottle."

"Blue bottles hanging around a house meant a death from fever." --from The Encyclopedia of Superstitions, Folklore and the Occult Sciences of the World, vol. II (a 1903 title now available again for $50 online).

Biddy Early's magic bottle--"by looking into the bottle with one eye and keeping the other eye open, she would be able to see what ailed people and view the future." Was she truly powerful or was it all legend? In her book The Red-Haired Girl from the Bog, author Patricia Monaghan notes that Biddy's bottle was blue.