Mountain Geography: What the Words Mean 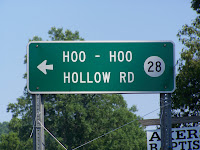 What the...? I would love to know where the name of this holler came from.
Often when I'm telling stories, I find that I need to stop to define some term of mountain geography that is not familiar to someone from another part of the country.
I'll start with the top and work down: Ridge: mountain, usually refers to the top where it is suitable for a trail or even a road. This is where you get those long-range views.
Head of the holler (hollow): where a small stream starts, beginning the valley or cut into the side of the ridge (or mountain, take your pick). There is usually a spring that is the source of the stream.
Spring: where an underground stream of water finds its way to the surface. Usually detectable by lush vegetation, soft ground, animal sign. The trees around a spring are sometimes different--willows, for example.
Run: the small stream that "runs" from the head of the holler and down the mountain. A neighbor once explained to me that it is called a run because "sometimes it runs, sometimes it don't!" Runs are often dry, especially in the summer months, but run very briskly after a storm. I saw a few good road names on these today: Whiskey Run, Cider Run, Cow House Run, Skull Run. The one on the sign above we saw while traveling to Twin Falls State Park. I passed Gamble's Run today, the scene of a murder in 1894, and the resulting ghost story.
Hollow (holler): small valley with a run or creek running through it. Flat: a piece of relatively flat land that is located on the side of a ridge. Not completely flat, but flatter than the land around it!
Creek: (and pronounced that way, not "crick" in my part of WV) When several runs join together as they head downhill, they form a larger stream called a creek. Creeks usually have water in them year-round. Some creeks are very large and deep. When creeks join together and form a large enough stream, they may be designated as a river.
My favorite creek name in WV is Strange Creek, named for William Strange who got lost in that area in the 1790's and carved a poem into a tree saying ""Strange is my name and strange the ground, and strange that I cannot be found." His rifle was found propped against the tree where he died.
Bottom: the flat land alongside a creek. Usually very rich and desirable soil, but prone to flooding in downpours or periods of heavy rain. Many people in WV live in the bottomland, but most try to locate their houses in places less likely to be in the water's path. Some of these names are downright funny too--like Boomer Bottom, Roundbottom, Young Bottom, and Green Bottom.
Valley: the land along a river. Often wide, usually flat, and prime cropland--again, prone to flooding. River bottomland has always been the most valuable in the mountains. Even George Washington staked his claim to large tracts in West Virginia in his surveying days! Many towns and cities in WB are located in river valleys.
Lick: a place where the spring that reaches the surface has salt in it. Animals, especially deer, will find these places, and lick the ground to get the salt. Pioneers boiled the water down to get salt. Licks can have funny names too--Mud Lick, Gee Lick, Frozen Lick, Fork Lick.
I think that about covers it! I've probably missed a few, but these are a good start.
Posted by Granny Sue at 7/09/2007 09:27:00 PM