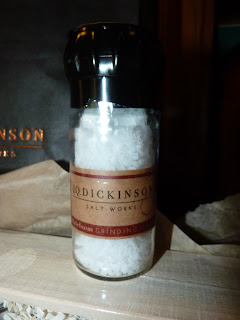 Following up on yesterday's post about the newly re-opened Kanawha salt works, I got to thinking about the superstitions we connect with salt.

We all know that if we spill salt, we must pinch some of it and toss it over our left shoulder to prevent bad luck. Why do we do that? Who knows--as with most superstitions the reasons are probably lost in time, although some say that it is to try to hit the Devil in the eye with the flying salt! Some connect spilled salt being a bad omen with Da Vinci's Last Supper painting. In the picture, Judas has apparently spilled some salt, and we know how he turned out.

When I was a child, my mother gave us the salt shaker and told us to sprinkle some on a bird's tale and we would be able to catch the bird. This, I do believe, was a creative way to get us out of her hair for a little while. We never got close enough to a bird to know if she was telling the truth but we were busy many afternoons trying to find out.

Some people say that when passing the salt to someone at the table you should never hand the salt shaker to them; you should put it down close to them instead. Apparently some connect handing the salt to handing over bad luck or ill will.

Salt on your windowsill or doorsill was supposed to avert evil spirits, and putting a ring of salt around your house was supposed to do the same. I remember once when my youngest son and my grandson had stayed up late watching a scary movie, they got so scared they went outside and sprinkled a heavy ring of salt around the house, as they had heard me talking about it. I was puzzled when a few days later the grass died in a circle around the house. My son finally owned up to what he'd done a few years later.

Although salt's protection against evil is probably the best-known superstition, salt was also believed to bring prosperity and was often given as a gift at weddings or on New Year's, according to this website.

According to the Folklore-L archives, we should always smile when passing the salt to someone, or else we will soon be on bad terms with that person. The site has a whole list of other superstitions, such as you should not return salt if you borrow some, and it's bad luck to borrow it in the first place.

According to the Encyclopedia of Superstitions, you must add a pinch of salt to the churn before adding cream or the butter will not come. And in Wales, the encyclopedia says that you should put a small heap on salt on the table before going to bed. If the salt melts in the night, you will die in the coming year but if it remains dry you will live to old age. I am not sure I would want to learn such news myself.

More superstitions, these from ezine:

"It has also been reported that salt is most effective to keep away unwanted company. If you had a visitor in your home and preferred that the particular caller not return, you simple sprinkle salt on the floor and doorstep immediately after that person leaves. Sweep up the salt and then burn it. You should not receive another visit from the unwanted guest.

In Buddhist folk tradition it was common to throw salt over your shoulder before entering your home when returning from a funeral. You could never be sure evil spirits were not following you from the funeral site. The salt would scare them away and prevent them from entering your home.

In Europe it was common many places to put salt in the coffin of the deceased to prevent the devil taking possession of the departed.

It was believed to be a really bad omen should you run out of salt. Always keep salt in your home. Many say "Short of salt, short of money". It is equally bad luck to lend someone salt. Never return salt that has been given to you or both the giver and receiver will have bad luck.

There are also superstitions about salt and fishermen. If one were to throw some salt on a fisherman it would certainly bring him luck.

In Ancient Rome, it was believed salt would protect newborns from evil demons and on the eighth day after birth the child would be rubbed with salt.

As late as the 19th century it was believed salt could protect newborn children in Britain. A small bundle of salt wrapped up in cloth could be placed in the cradle to protect a child who was not yet baptized. Equally a little salt was placed in the pocket of the baby's clothes for protection the first time the infant left the house.

To this day many people around the globe still believe in the magic powers of salt. Some people in Asia still insist to have a small bag of salt in their car to ensure a safe journey."

There are many sayings about salt.  Salt was thought to cure wounds,but we're more familiar with the saying of "rubbing salt into old wounds" which means saying or doing something that brings back bad or sad memories. Then there's salty language, sailors referred to as old salts, someone being the salt of the earth, being above or below the salt (meaning your reputation or rank in a community) taking some news with a grain of salt, and many more. You can find quite a list here. Each one is accompanied by a brief explanation.

I'll end with short synopses of two of my favorite folktales about salt. 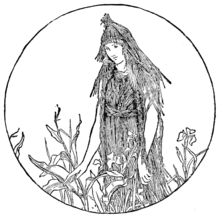 The first, Like Meat Love Salt, is the story of a proud king who asks his three daughters how much they love him. The first two give answers he likes, but the third says. "Like meat love salt." The king believes she is making fun of him and kicks her out. After many trials and troubles, the girl ends up marrying a prince. One day an old beggar appears at their palace, and the girl recognizes her father. She brings him in and has him come to dinner without telling him who she is. She asks him how he came to such a state and he responds that his two daughters did not want him now he is old, and that he knew not where his third daughter was. Then he tasted his dinner meat, which had been cooked without salt, and he began to weep, realizing what his daughter's words had meant. The daughter identifies herself and tells him he shall live with her to the end of his days. You can find one version of the story here.

The second is the story of why the sea is salt. A poor man does a good deed for an old man and is given a mill which grinds out anything he asks for until he tells it to stop. His rich brother sees how well off his poor brother has become and steals the mill but doesn't know how to make it stop. He is a ship captain and asked the mill to grind salt which it did. But since he didn't know how to tell it to stop, it continued to grind until the ship sunk, carrying the hapless captain and crew to the bottom, along with the mill which continues to grind to this very day. There are several versions of this story as well, which you can read here.

So, enough saltiness for today!