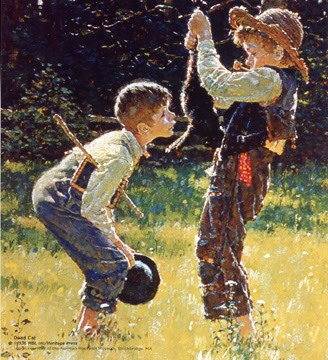 A recent porch conversation came around to the topic of superstitions and folklore. A visiting neighbor told us a unique cure for warts, one his grandparents swore by when he was a boy.

"You have to go into your neighbor's house and steal their dishrag. They can't give it to you, you have to steal it. You take the dishrag and rub it all over the hand with the warts, or wherever the warts are. Then you have to bury the dishrag. The warts will disappear."

I'd never heard of such a cure, although I know there are all kinds of remedies out there.

My husband said, "We had a different way for dealing with them. My uncle told me this. He said you take a straw from a broom and you poke and poke and poke at the wart til it bleeds. Then you have to bury the straw for the cure to work.

Years ago a friend said that the way to get rid of warts was to sell them to someone. The person would say a prayer and then rub the warts with a penny. The prayer was a Bible verse, Ezekiel 16:6, the same one used to stop blood or take the fire out of a burn.

*rub with a bean pod, then bury the pod. The wart will disappear as the beans rot in the ground. (What if the beans sprout, though? No mention of that.) You can also rub the wart with coffee grounds, apple halves, wheat, corn, bacon or all kinds of other foods. The trick is that whatever you rub it with has to be buried afterwards.

*rub the wart while a funeral procession passes and chanting, "Wart, wart, follow the corpse." I hope one could just whisper this, as it seems a little disrespectful to me.

*wash the wart with holy water; or wash it with water from a stump, or---gross alert--with the blood of an eel. Yuck.

*make a midnight visit to a crossroads, and spit in the middle of the crossroad. Hmmm....

*count the warts. Do this for nine nights, before going to bed. The warts will disappear.

*tie a horsehair around the wart.

*prick the warts with a pin and leave the pin at a crossroads at night. You could also collect stones from a creek, touch each wart with a different stone, then leave the stones at a crossroads, or throw them back into the creek over your left shoulder.

*In the book Tom Sawyer, Mark Twain described this method of ridding oneself of warts: Take a dead cat to a graveyard where someone evil was buried. At midnight, the Devil himself will arrive. Throw the cat at the Devil while chanting, "Devil follow corpse, cat follow devil, warts follow, cat, I'm done with ye!" That would surely scare the warts off anyone!

*The blog  Feet, Shoes and Superstitions offers this remedy: One other common practice was to pick the wart with a pin then stick it into an ash tree, reciting: "Ashen tree, ashen tree, pray take away these warts from me." The warts will then be transferred to the tree.

*Wash your hands in a metal bowl in which the moon's rays are shining, and chant: "I wash my hands in this thy dish, oh Man in the Moon do grant my wish, and come and take away this!" From Encyclopedia of Superstitions, Folklore, and the Occult Sciences of the World edited by Cora Lynn Daniels.

I am fortunate enough to have never had a wart, but I feel fully prepared to deal with one should the need arise. Because I will just go to the doctor, and follow whatever practices modern medicine suggests. And if that doesn't work, maybe I'll be over to steal your dishrag!