This Year's Tree, Family, and Fun 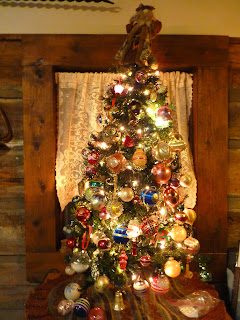 It was a marathon, but in the end I won.

Imagine putting 5 different strings of lights on a tree, looking for one that worked!

The first string I tried, Larry assured me worked fine. But once on the tree, no lights.

I tested the second string and it worked, until I'd wrapped it all the way around the tree. Then it went out.

The third time is supposed to be the charm, right? This string was another that Larry said worked. I started to wind it onto the tree, then thought I'd better check--only half of it lit up.

The fourth string was a real show. It worked fine and I decided to leave it plugged in while I wrapped it on the tree. It worked great for about 10 seconds after I finished, then went out with a loud POP!

The last try, I went and found two brand new boxes of lights. At last, success. So if you  saw a blue cloud hovering over the general area of Sandyville, WV last night, now you know why.

But tree trimming was held up a bit as my son and two of his three grown children and his little grandson came to visit. I'd made chicken noodle soup, and had just started  making chocolate chip cookies, so they sat and ate while I mixed batter. When I added the flour and turned on the mixer, WHOOSH! Flour exploded everywhere because I'd turned the mixer on too high. Flour on my, on the floor, on the stove, on the counter...a white mess, and one wonderful laugh! We cleaned it up, and the cookie making progressed without further incident. They came out pretty good too, at least the ones that I didn't leave in the oven too long.

Derek and Jared worked on an old camera I had on my desk, planning to take to a booth. 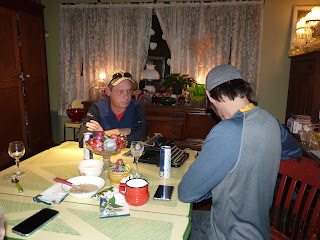 They were curious as to how it worked, and after a little while not only figured it out, but cleaned the viewfinder thingie--no small feat!--and looked online to see if there was film available for it. There was, and I may hold on to this 1920's Kodak until I can get some film and try it out. 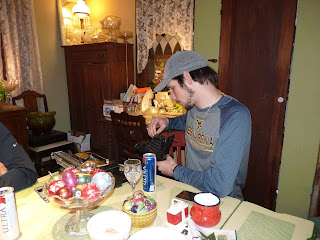 Baby Ryland stayed close to his Mama--he's at the age where he recognizes people who are strangers, or that he doesn't see very often. 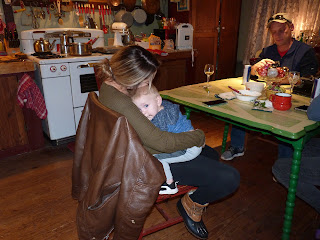 But he sure liked the cookies, after taking a taste! 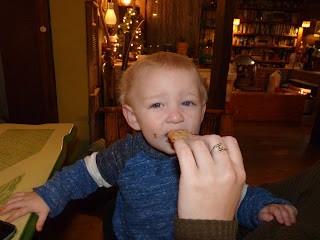 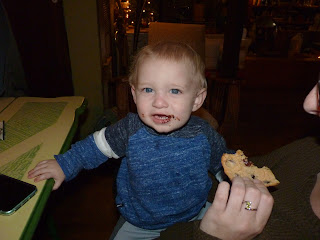 Then it was time for eggnog, trying this year's fruitcake, listening to carols, talking and sitting in the log room by the fire and by the lit but not decorated tree.

while Larry and Jared stayed close to the fire. 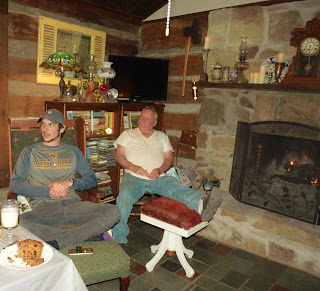 We had such fun watching baby Ryland try to make friends with our yellow lab Daisy. Every time she saw him crawling toward her, she ran for the door. I think she was trying to figure out what this new four-legged creature was. In the end she tolerated him, especially when he gave her treats. He loves dogs, and was determined that she was going to like it. It was so nice to watch him (he's just 14 months old) stroke and stroke her and talk to her. I wish I'd thought to take photos, it was so cute.

I hated to see them all leave. As the years pass, it gets harder and harder to get family together, so it's always a treat. When the house was quiet again, I ignored the piles of dishes and finally started hanging decorations on the tree. I'd asked Jared to put the bubble lights on it for me, and he did--upside down! I didn't think about the fact that he'd never actually seen them up close. I finished up while Larry watched a movie, and went to bed with the dishes still undone.


This morning I washed the dishes, not nearly as bad a job as it looked when I was tired.


And this evening I decorated two more trees. 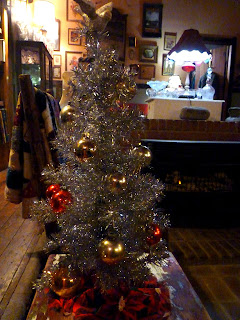 This one is not vintage, although the seller said it was, but it's cute as can be anyway. I've wanted another silver tree since I sold the one I had a few years ago, and this is just the perfect size. I actually got two of them in the ebay auction, so I will sell the other one.

And this little tree I am calling my "friendship tree," as almost all the ornaments on it were gifts from or made by friends, or ornaments bought on my travels. 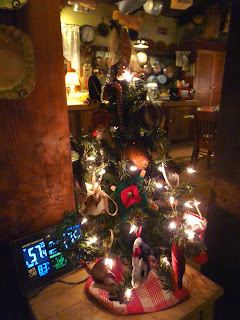 I still have all the other decorating to do, but this is a start, and Larry has most of the outside lights up. I am slowly beginning to feel the magic of the season, a season that I always enjoy for its folklore and mystery--not to mention good food and fellowship!

My Sunday was one of trial, tribulation, laughter, good food, and family. A great day, all in all.

Lovely family time. To be enjoyed, and worry about getting stuff done, later.

and oh how cozy and welcoming your home is.

Such pretty decorations! And I had to laugh about the lights, though I'm sure it wasn't funny at the moment! This may be the year I don't have a tree, as my entire house is in such a state there isn't a square foot of space. Housework is never my strong suit, but everything has gone into keeping the animals cared for and the fire going since November came in so hard - there just isn't energy left over for anything but laundry and washing dishes. Still, we'll see...I do love having a tree! :)