46, showers and heavy overcast. Snow in the forecast for tonight.
Chocolate? In jam? Why, yes.
A friend's post on Facebook led me to try making this jam. It's certainly different from any other jam I've made. It's delicious on hot biscuits, and I think it'd be a fantastic dip for Christmas sugar cookies. 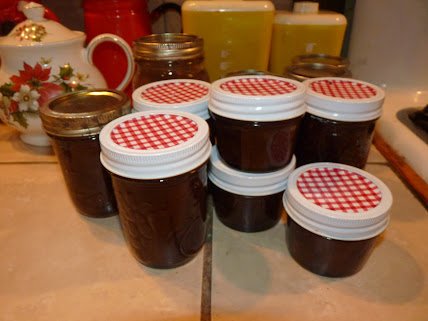 Chocolate Pear Jam-- it's simple enough to make, and has an exotic flavor--dark rich chocolate with sweet pear and a hint of cinnamon. A few friends and family will get some of this for Christmas, but I hope I can reserve a few jars for us, just for special occasions.
Here's the recipe, from the Food in Jars website, along with my notes on the process. Food in Jars notes that she adapted this recipe from one she found in the book Notes From the Jam Cupboard by Mary Tregallas--which is already on my Amazon to-buy list.
Chocolate-Pear Jam
2 1/2 pounds of ripe pears. I used Bartlett's, and had 7 of them.
2 lemons. I used lemon juice, about 2 1/2 tablespoons.
3 1/2 cups granulated sugar.
2 tablespoons water.
1/2 teaspoon cinnamon
5 1/2 ounces dark chocolate. The recipe stipulates high quality chocolate, 70% minimum, whatever that means. I had Hershey's dark chocolate kisses on hand so I used those.
Candy thermometer--not an ingredient, but you'll need one on hand.
Peel, core and cut the pear into small pieces. Put the pieces into the pot you plan to use to make the jam, along with the lemon juice and water. I stirred the pieces as I worked to be sure they were coated with the liquid so they wouldn't turn brown.
Chop the pears up as small as you can. My friend put hers in her food processor, but I just used a potato masher and a vintage chopper as my pears were very ripe and soft--and I like a little texture in my jams.
Cook this mixture on medium heat, stirring often, until it reaches a simmer.
While the pears cook, chop the chocolate so it will melt quickly when you add it to the pear mixture. Set it aside while the pears continue to cook.
Once the pears reach the simmer stage, add the sugar and cinnamon, and increase the heat to medium high. Cook until the mixture reaches 220 degrees on a candy thermometer. Keep stirring frequently because the jam may want to stick to the bottom of your pan. Mine sure wanted to.
When the jam reaches 220 degrees, remove the pan from the heat. and add the chocolate pieces. Stir until the pieces are melted. Then ladle into sterilized jars, put on the lids and rings and tighten.
Process in a boiling water bath canner for 10 minutes. My yield was 6 half-pint jars, and 4 quarter-pint jars from this recipe, enough for several gifts, with a jar or two for us.
Copyright Susanna Holstein. All rights reserved. No Republication or Redistribution Allowed without attribution to Susanna Holstein.
Posted by Granny Sue at 11/30/2020 01:35:00 PM