Seeing is Believing: A Story for Halloween 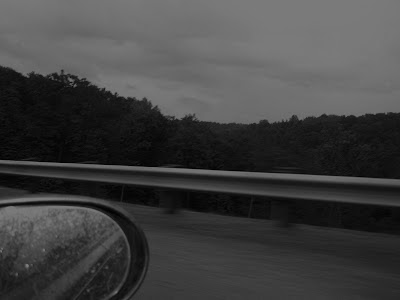 I was driving home late one night. I had been helping my son move into his new house, and I was tired. It was a beautiful August evening, the mist rising from the creeks and the full moon shining silver on the dark earth. I drove slowly because I knew the deer would be out grazing on the side of the road.

My car rounded a curve where many accidents have happened during the years I’ve lived in Jackson County. I laughed to myself as I remembered the time a state trooper misjudged the depth of the curve and his cruiser landed nose-down in the pond just off the road. My eyes strayed briefly to a makeshift monument along the guardrail, a memorial to a teenaged girl who had been killed in that place by a drunk driver.

That was when I saw her. She was leaning over, holding on to the guardrail. Her hair was long and golden, hanging over her bare shoulders—shoulders that gleamed whitely in the moonlight. She was wearing a pale blue sleeveless dress with little yellow flowers scattered across it.

My foot jerked off the gas pedal but I had already passed her. What was she doing out at that hour? My mind raced to find an explanation. The flowers at the memorial had looked dowdy lately—perhaps she had come to change them. But at this hour? The thought flashed through my mind as I looked back in my rear view mirror to see what she was doing.

She was gone; there was no one in sight. The memorial flowers drooped beside the makeshift cross that tilted against the guardrail. My car slowed even more and I felt suspended in a space without time or weight.

I had seen her; I had not imagined her. I saw her fair hair spilled across bare shoulders in the sleeveless blue dress. I saw the little yellows flowers that dotted the thin fabric. But she was gone; there was no one on that dark road but me, traveling through silver moonlight at midnight.

I drove the rest of the way home in a daze. Had I dozed off in that curve, and the girl only a dream creature in my half-awake mind? I was sure I was awake, although there was no denying the strange weightless sensation I had when I looked back at that empty road. I walked into my house, uncertain and shaken by what I had seen.

I told no one about it for several weeks. I was sure that people would laugh at me. Her own tales have bitten the old storyteller, that’s what they’d think. So I kept quiet, but each time I drove past that roadside memorial I looked for golden hair and long white arms.

I never saw her again.

A few weeks later I saw a young woman I had not seen for several years. We chatted and caught up on our families’ news. I remembered that she had bought a house about five years ago, a house close by the spot where the dead girl’s memorial stood.

“How do you like your place?” I asked. “It seems like a nice location, convenient to town.”

“Oh, we really like it. There are a lot of accidents there, though. People are always coming to our door for help.”


“Yes, I can recall quite a few mishaps in that curve. It’s a bad one. Do you remember when that girl was killed there a few years ago?” I asked.

“Yes, we moved in about six months before that happened. It was terrible.”

“Does the memorial bother you? It seems like a sad reminder, right there by your driveway.”

“No, it’s okay. Her family comes out sometimes and they keep it up. I guess it makes them feel better to do that.”

I looked at her for a long moment, and then said slowly, “You know, I had a strange thing happen to me at that spot a few weeks ago.” The words dragged out of me. I had no intention of telling her about my experience when our conversation began, yet the story spilled from my lips.

When I finished, the young woman just stared at me.

“You’re thinking I’m crazy,” I said apologetically. “Most likely wasn’t anything--anyone--there at all. I know you go to church and all and this probably sounds weird to you.”

“It’s odd you should tell me this,” she replied quietly. “My little girl was only six months old when we moved to our house. She was too little to remember what happened, I’m sure. Yet as soon as she could talk, she would ask me, “Mommy, who’s that girl sitting on your Jeep? Mommy, who’s that girl over there?”

"I could not figure out what she was talking about, and then I began to wonder if she was seeing something the rest of us could not.”

I have not seen the girl in the blue dress again. I have not mentioned it to the young woman again about it since that conversation.