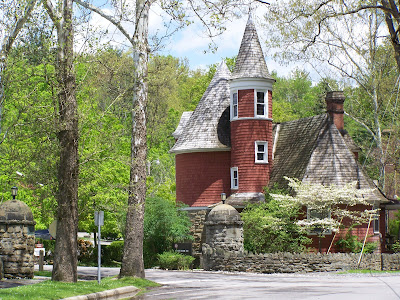 As I was browsing photos with my granddaughters we came upon a picture of a pretty little brick building, and I had to laugh out loud as I recalled the night I spent there with Tommy and Larry.

About 10 years ago, I was invited to tell ghost stories for a haunted trail. Tommy, my youngest son, was about eleven. He and my husband would accompany me on the trip. The October weather was crisp and bright, a perfect time for ghost stories and spooky walks in the woods.
Part of my payment was a night's stay in the Gatehouse. The little house was beautifully furnished in period antiques, and the setting on the college grounds was as pretty as could be. We were all looking forward to spending time there.

The young man who showed us around was also the one who had planned the haunted trail. As he and I discussed what story I should tell (he wanted something planned around the various scary things along the trail) he mentioned that there was a ghost story connected with the gatehouse itself.

"Really!" I was all ears. I am always up for a good ghost story.

According to our host, there was once a family living in the gatehouse who had a young daughter. One winter night the child somehow wandered up to the third floor of the tower and fell out of the window. The weather was well below freezing, and the poor child was dead when she was found in the morning.

"People have said they've seen her here," he said. "They say she wears a long white gown, just a little child. They see her in the window up there." We looked up at the window--it was a steep drop, and a fall from there could certainly be fatal.

The young man left and we began unpacking. All evening I noticed Tommy hanging close by me. I tripped over him at every turn and it made unpacking difficult to say the least.

"What's the matter with you?" I finally asked, exasperated.

"I don't want to see that girl!" he said, pulling even closer to my side.

After the storytelling (which went very well--I wrote a story based on an old chilling tale I'd read, threading it with the scenes the young man had described from the haunted trail) we returned to the gatehouse and prepared for bed. Larry and I planned to sleep in the master bedroom, and Tommy would have the smaller bedroom across the hall.

Tommy, however, would have none of that. He was sleeping with me! Dad could sleep across the hall. He could not be persuaded to enter the small bedroom at all.

So that's what we did. I put on my favorite white nightgown and Tommy and I settled down in the big fourposter while Larry snuggled down in the smaller room. Unfortunately, Larry snuggled down a little too well. He began to snore so loudly that it was impossible for Tommy and I to fall asleep. I got out of bed and walked across the hall, intending to wake Larry up so he'd change positions and hopefully stop snoring.

I stood in his doorway and whispered, "Larry! Larry! Wake up!"

Larry sat bolt upright in the bed. On seeing me in my long white gown in the door he started to yell--AAAAAAAGGGGGGGHHHHH!!!!!

Tommy in the next room heard his Dad's yells and convinced that the ghost was near, he started yelling too. AAAAAAAAHHHHHHH!!!!

I flipped on the light. "What in the world is the matter with you two?" I asked.

Then I realized what had happened. "You idiots! Stop yelling and go to sleep!"

It was a long time before I quit laughing and got to sleep myself. The next day Tommy hung close again. He followed me into the kitchen and even the bathroom. Nothing could convince him that the closest he'd come to seeing a ghost was the night before in the hallway between the bedrooms.

As for Larry, he denies the whole thing. Scared of ghosts? Not him!