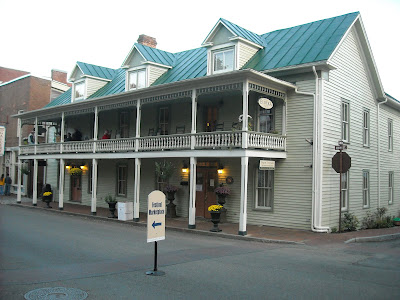 The Eureka Inn in downtown Jonesborough is the place I wish I could stay--right in the middle of the action. But it's booked for years in advance.
I wrote a long post last night about the National Storytelling Festival last night, only to have it vanish into thin air. The joys of Blogger. So here is the condensed version:

The National Storytelling Festival was held this past week in historic Jonesborough, Tennessee.
Although the festival begins earlier in the week, this year I could only be there for part of saturday and all day Sunday. I was determined to make the most of my time and at the end, I felt full of stories, friendship and new ideas.
My first festival stop was the National Storytelling Network tent; I'd volunteered to work a couple hours on Saturday because I knew we'd get to Jonesborough late and I did not want to pay $100 to see one or two sets; call me cheap, but ya know...

Working the tent I met people, saw friends, re-learned why the organization is important to me, and just enjoyed myself. Lorna Czarnota stopped by and during a slow time we swapped ballads. When my work time was up, we moved to the ISC steps and continued singing. We met Baba the Storyteller and Eric Wolf there; Baba sang a song from Africa for us. They left, and Adam Booth (a wonderful young WV storyteller) joined us. Adam knew a few ballads so we continued singing and talking and laughing. 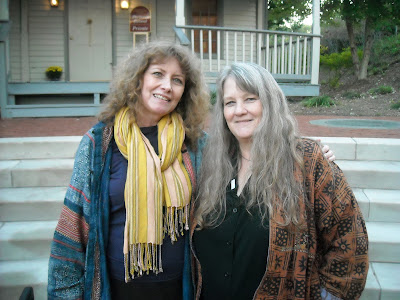 With storyteller Lorna Czarnota. I enjoyed her original songs, written in the ballad tradition.

After Lorna left for home I drifted around J'boro for a while, stopped in at a coffee shop and listened to a guy called Lightnin' Charlie play guitar and sing for an audience of locals. He was a fine performer, funny, a great singer and they all knew him well enough to ask how his wife was doing (baby expected in 5 weeks). Lightnin' Charlie said he's selling his limo, so if you're in the market, there ya go! He said if you saw a limo at the Wal-Mart, you knew Lightnin' Charlie was there. What an image. 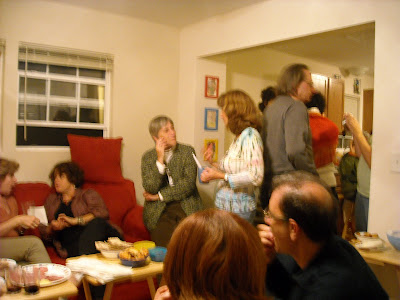 No, I wasn't feeling that fuzzy, but my camera sure was. I don't like this little Nikon--it can be so good and so bad and I never know which it will be at any given time.

Later Saturday night I found Karen Chace coming up the hill to start the Storytell get-together. Storytell is on online discussion list for storytellers, and during the 12+ years I've been a member I have made many longlasting friendships among its members. We get together at conferences and festivals, and whenever an opportunity presents itself. Now yall, that party was a hoot! I met new people, old friends and the talk was just a delight. Several were Facebook friends I'd never met. Too much fun. 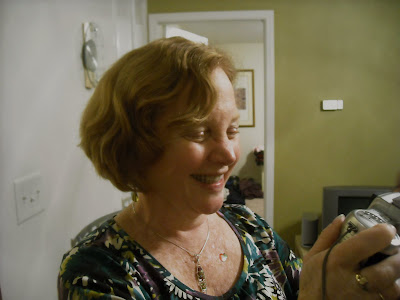 Karen taking a picture as I took a picture of her. 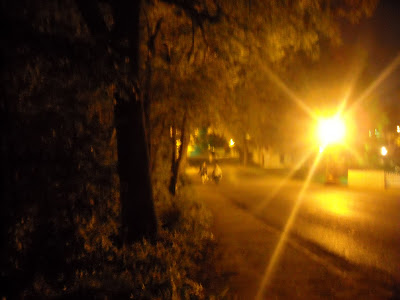 Two weary storytellers trudge through the evening mist toward the car for the journey to the motel about 5 miles away.

Around midnight I met my tripmates and we drove to our hotel, completely tired and happy.

Note to self--never share a room with two other over-50 ladies again! Everyone was up and down all night for all sorts of reasons, not the least of which was the commode overflowing at 3am. One of the rules set by one of the ladies was: no men in the room. Ha! She was glad to see the maintenance MAN at 3am :-) Little sleeping went on, but a whole lot of laughing sure did.

Sunday morning (after the tempestuous and pretty much sleepless Night of the O'erflowing Commode) we were back in town early for the NSN membership meeting and national awards ceremony. My friend Bob McWhorter, who started the WV storytelling festival and drew most of us state storytellers out of the woodwork, received the Mid-Atlantic Oracle Award for his service to storytelling. 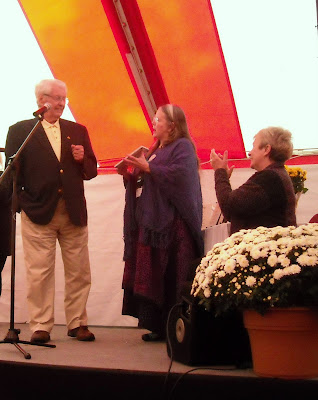 Bob, Jane Crouse of Virginia and our regional liaison, and a lady whose name I can't recall

I spent the day listening to as many tellers as possible. Sunday's stories are loosely categorized as "sacred" stories, and the tellers interpreted that term in many different ways.

My favorite?--so hard to pick one. Niall De Burca from Ireland was probably top of my list. He was exciting, energetic, engaging and thank goodness told a folktale or two. (Folktales, at least in the tents where I was listening, seemed to be a scarce commodity).

Regi Carpenter from New York state told masterfully about her childhood on the St. Lawrence River and sang beautifully. Kathryn Windham at 91 years old held us spellbound and received standing ovations and brought tears to my eyes with her gracious humility. Donald Davis kept us laughing and crying with his tale of alementary-school valentines, and Baba Jamal Koram took us with him on a journey of discovery and unde. Sheila Kay Adams managed to work through a LONG train running through her story as she told in a tent very near the railroad tracks--and to the delight of the small boy seated near me, and apparently made a rude gesture when the train went on and on and on...her idea of sacred stories obviously being a little different that what you might expect :-). There were more tellers, all good, but these were highlights for me.

The very best part of the festival, as always, was seeing so many friends again. It has been five years since I've attended a conference, and two since I was at J'boro, and I was so glad to be able to hug and be hugged and knowing that we are as we always have been, very good friends, even though we are often far apart.