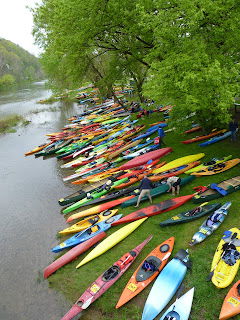 This weekend we traveled again, this time to Pocahontas county, West Virginia for the Great Greenbrier River Race, a triathlon that includes 3 miles running, 4 miles kayaking and 10 miles on the bike. We had 8 family members in the race this year--our oldest son George, his son Clayton (16), our son Aaron and his wife Jaime and son James (10), Derek's son Jared (21), and daughter Haley (16) and Jared's girlfriend Janelle who was participating with Jared as a team (she ran, he did the bike and kayak). Derek usually participates too but this year he is on a training mission with the Army National Guard. Larry and I, along with granddaughters Hannah and Cassidy and Cassidy's boyfriend Garrett, George's wife and Aaron's little daughter Michaela were there as support and cheering section. 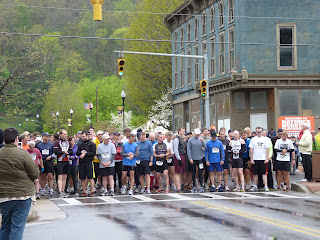 The weather was awful--rainy, cold and miserable early in the day. For the last two years that we've been there it's been beautiful weather but this year the charm broke. Still everyone was determined to go ahead so we bought hoodies, ponchos, umbrellas and whatever else we needed to be warm and headed to Marlinton this morning. 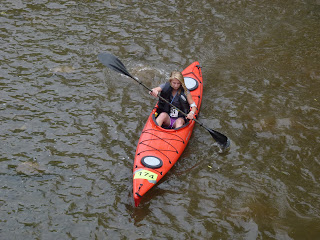 The rain mercifully ended just before race time and it actually warmed up a little. We watched the runners take off, then ran to the bridge to wait for them to return to get their kayaks for the next leg of the race. Haley was the first of our family to get to her kayak and she made a fast transition, getting into the water in less than 30 seconds--that quick transition cuts time from her race total. 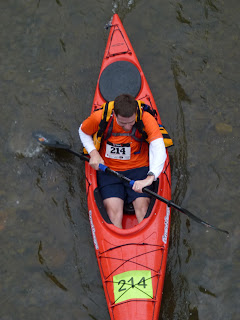 George was close behind her, then Aaron and Clayton arrived, then Jared, and Jaime and James. All got into the water and headed downstream. We headed across the street to the restaurant for hot drinks and hot food. We just had time to eat before the first racers began crossing the finish line so we hurried back out to wait for our guys. 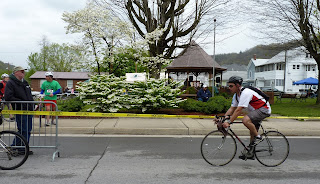 Again Haley finished ahead of the rest and her time was impressive, just one hour and 47 minutes to complete the course. Her running time for the 3 miles was 22:13, and excellent time. Aaron was not too far behind her.

We began to worry then because we expected George to be coming in very soon, as he'd had a strong race last year. After a while he crossed the line and we learned that Clayton's bike chain had come off so George had stopped to help him. Clayton's time was also slowed because his chain problems meant the bike's gears weren't shifting as they should. 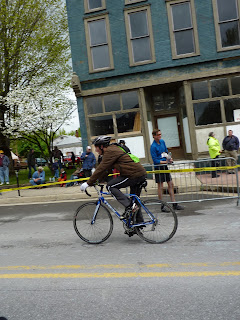 Jared had problems with his kayak, getting caught in a rogue current and that slowed his time. He and Janella partnered--she did the run and he did bike and kayak. He made up a good bit of time on the bike. 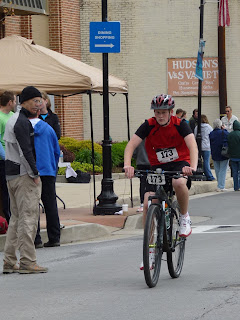 Clayton followed soon after Jared, and then Jaime and James crossed the line. 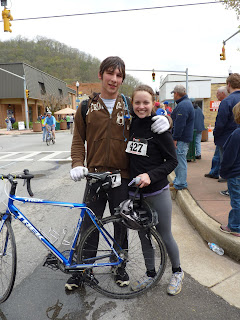 We had a lot of winners, because to me everyone who enters the race is a winner, and everyone who finishes is a placer.
(Jared and Janelle) 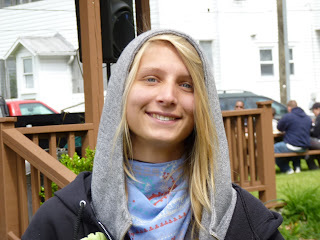 But our Haley really turned it on this year and won the youth division (which includes both males and females under 17) and her time was the second best of all the female racers--and there are some serious contenders in this race. We were on the phone with her dad with frequent updates all through the race. 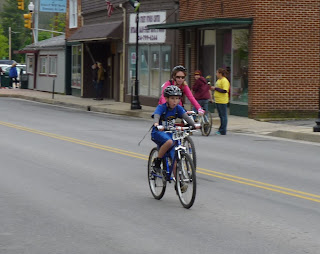 James also gained recognition as the youngest racer to finish the course, and he did it solo, completing each leg on his own steam. He was so proud! Mom Jaime stayed with him the whole way to be sure he made it safely.

Clayton, despite his bike problems, still had a respectable finish for his first-ever triathlon. He and James both plan to compete again next year, along with all of our other racers.

The rain held off the rest of the day and we headed home tired but happy. As soon as we got here, the storms started again, so we really we lucky that the weather during the race.

Congratulations to all of the participants, and a big thank you to all the volunteers who make the race happen each year!