I have been through Dailey, West Virginia, before on my storytelling travels but I never knew the history of this small mountain community. Nestled in the Tygart River Valley just below Elkins, West Virginia, Dailey was part of the Tygart Valley Homestead Project and was built by the Roosevelt administration to be a planned, self-sufficient community that would grow its own food, produce crafts and other work for income and provide all other needs of the residents such as housing, education, medical help and so on. It was a grand plan and included the communities of East Dailey and Valley Bend.

Built in 1934, Dailey was the largest of three New Deal resettlement communities built in West Virginia (the other two being Arthurdale and Eleanor). The target population was men who had lost jobs in the timber industry, lumber mill and railroads. The men were to work at the community farm and the lumber mill three days a week  to pay back the very modest cost of the homes. I later learned that these homes had oak flooring on the first floor and pine on the second floor--exactly like my first house in Virginia, a small log cabin built by a former Civilian Conservation Corps worker. I suppose he got this idea, along with the skills to build with logs and quarry stone, from his days in the CCC. The men also worked an additional 3 days a week to provide for the other needs of their families, and the women cared for the gardens, canned and put up food, and perhaps worked at the weaving shop in the Trade Center.

All of the houses were built in one of two styles designed by architect Benjamin Smith: there were gambrel roofed houses (barn-shaped) and others called A-frame. These were truly homesteads, with root cellars, chicken houses, a garden plot, fruit trees, etc. Homesteaders could "check out" gardening tools from the community library.

The school where I was to tell stories was part of the original settlement too, although built later in 1939.

It looks very like other school buildings constructed in the late 30's-early 40's, but what struck me about this building was that it included some things that have been left behind, sadly, in today's elementary schools: things like a music room, an art room, a library, a theater and gymnasium. All aspects of education were included, while today music, art, libraries and physical education are often left out of building planning. What a loss for our children. I learned on the school's website that many children attending the school today are descendants of the original homesteaders. 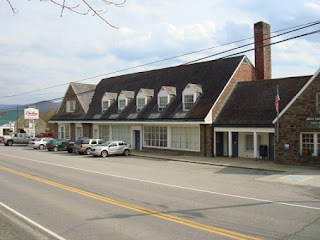 I ate lunch in the building originally called the Trade Center (currently for sale--see here). It was built of stone, with many windows, a beautiful place. As I ate, I thought of how Dailey must have been in those early days: bustling with workers, women weaving rugs in the Trade Center, children playing at the school, the fruit trees blooming in each yard. Perhaps some would argue that this was too much interference by government but to those early settlers I would bet it was a dream come true, a chance to regain a respectable life and hope for a stable future. The town was able to pay off its debt to the government when the lumber mill was sold to a private firm; today Dailey still boasts many of the original structures.

To think I stood perhaps in the same place Eleanor Roosevelt stood when she visited the town in early December of 1937, was a happy thought. And yet visit she did, to dance with local residents at a square dance as she enjoyed the fruits of at least one of her efforts to create a future for rural Americans.

It is just one small town, a place you might zoom through on your way to the ski areas at Snowshoe or the kayaking at Marlinton or the rugged Kumbrabow State Forest. But next time you're traveling south on US 219, take a moment to stop in Dailey and consider the history of the site; have lunch at the Trade Center building and maybe buy some of their delicious fudge. And tip your hat to Eleanor Roosevelt and the other planners of such projects that enabled a rural population to establish a long-lasting community by providing a solid base from which to start.