Call for Help: A Story for Halloween 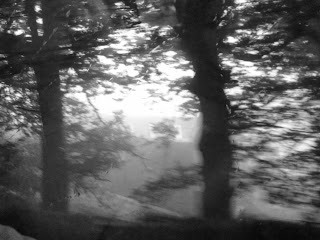 "What's that, Grandma? Did you hear that? It sounded like someone tapping on the window."

Grandma looked at the window. It was dark outside, but a light suddenly glimmered as the tapping came again.

"It's nothing. No one is there. Let me tell you a story."

"It was a favorite gathering place for the young people. The pool was deep, cool and secluded from prying eyes. They came often in the hot afternoons, but their favorite swimming time was in the dark of night, when the air was cool but the water still warm from the day's sun.

She was the most beautiful of them all: raven-haired, with cheeks like Maiden Blush apples and lips as red as the juice of blackberries. She did not come often to the swimming hole; her watchful father made sure of that. But this night he went to bed early, worn out form a double shift at the mines, and he was sleeping soundly when she slipped out the door. Her mother, a poor mouse of a woman, watched the girl leave without interest. From the shadows of the porch she watched her daughter carefully closing the door so that the latch made no click, watched her swaying walk down the path.

At the gate a boy's voice whispered, "Ready? Did you have any trouble gettin' out?"

The girl laughed. "None at all. He's asleep and she's too scared to wake him to say anything to me."

There were already a few people at the pool when the girl and her boyfriend arrived. She quickly stripped off her sundress, smoothed her swimsuit over hips that were already filling out to womanhood, and stepped to the diving rock.

"You gonna dive, or you wanna swing out on the vine?" a red-headed girl asked.

"Swing! It's more fun than anything!"

The dark-haired girl grabbed the vine and took a running start. Her feet lifted from the rock and she soared out and over the bank, shining like an angel in the darkness. Her boyfriend caught his breath.

That was when it happened. The vine broke. With a high scream the girl plummeted towards the bank, and the sharp, broken branch that jutted upwards from a storm-struck sycamore tree. Her scream cut off as her body struck the branch and impaled on its sharp point.

The stunned silence was broken by a loud cry.

"Someone go for help! Go for help!" someone yelled. Her boyfriend grabbed the lantern.

"I'll go! Get her down, please get her down!" He could hear her soft whimpering cries that tore at his heart. He raced off through the dark woods towards where he knew he would find the closest house."

Grandma paused. She looked again at the window. There was no light now, no tapping.

"He never made it. They found him the next day. He was so scared, so horrified by what had happened to his girlfriend that he had a heart attack and died on his way. He was coming here, you see. Ours was the closest house. But he never got here. The girl died too. It was all so sad.

Based on a story told to me yesterday by a 6th grade boy in Richwood, WV.