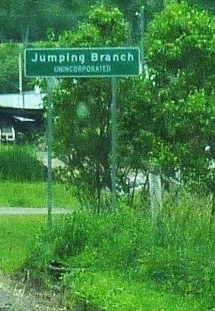 I was so intrigued by the community of Jumping Branch when we passed through there this week that we returned after my storytelling performance to learn a little bit about the community.

First, how did it get its name? I am always interested in place names, especially those that are a little odd. According to The History of Summers County West Virginia by James H. Miller, "Jumping Branch is a stream running by Jumping Branch Post Office and village on its way to Bluestone. In the days of the early settlement there was no bridge across it, and the traveler made his crossing by jumping his horse from one bank to another." Another reference in Miller's book noted that men would also jump their teams of horses over the stream. I'd like to have seen that.

At the library I asked a staff member about the place. "Well, I live there but I don't know the history because I'm not from there, you see. We moved there a few years ago." Some of us are just born curious, I guess, while others accept things as they are.

The old buildings seemed to have stories to tell, but how to find them? On our way through the first time I saw an elderly lady getting her mail and decided that I would try knocking on her door when we returned, to see if she could tell us anything about the place.

It turned out that she was a good choice. Not only did she know about Jumping Branch, she'd lived there all her life. She went back inside her pretty home and returned with a scrapbook of old photos.

Her father, she said, operated a store in the green block building for years. He was a butcher but also sold a variety of other things, including kerosene, I noticed, judging by the old tank beside the block building. The large building across the way was once the Odie Meador Lumber Company store. I later learned that the owner of the lumber company, Mr. Meador, was elected sheriff of the county in the 1970's but died in office. The front part of this building is believed to be log.


Was this once a coal mining community, I asked? The cluster of buildings reminded me of coal camps I'd seen in other places in our state, but she said no, this was a farming community and the stores here supplied the surrounding farms. It was easy to see this; the land lays beautifully with rolling meadows and pastures well watered by streams. 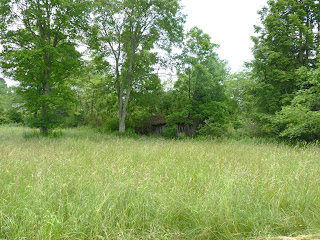 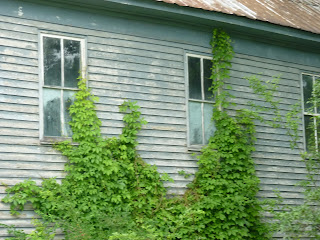 There was an auto repair garage here too, the concrete base of the pumps still barely visible under encroaching grass. 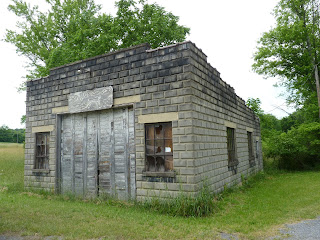 I believe she told us that this was once the post office.

This house, she said, was once used as a local hospital. I did not think to ask what time period that might have been. 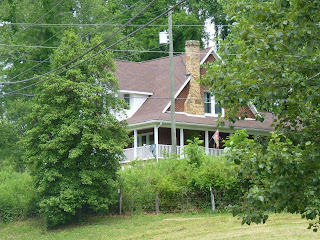 Not far from where we were talking to our new friend was the Bluestone Baptist Church. According to our informant, the church was established about 1782. I searched in Mr. Miller's history book and found that the church has had an interesting history. He gives its establishment as 1798, still very early days in the US. The meetings were originally held in the log house of a Mr. Meador, and people came from miles around, from as far away as Giles County, VA. Eventually they built a log church, which burned so they built another which was burned by Federal troops in the Civil War. The church managed to weather all storms and continues to serve the area to this day.

Once Jumping Branch had two grain mills, our informant told us, and people would come from everywhere to get their meal ground. Now the mills are gone, but I thought I could see the site of one of them under a tangle of growth along a stream. 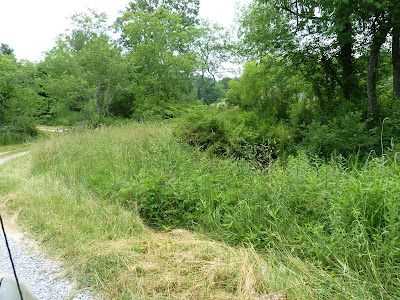 Before we left, our friend told us the story of her great-grandfather, Joseph Floyd Young, who served in the Civil War as a Confederate soldier with 151st Militia, and later the 17th Virginia Cavalry.

According to the family story, Young was shot through the temple--clear through. The wound was cleaned by pulling a silk handkerchief back and forth through it. Can you imagine the pain? Mr. Young survived the wound although he was blind, she said, and felt his way around the house. He would feel for the stove by stretching out his hands to feel the warmth.

The story amazed me. How could anyone survive such a wound? I found a bit more about it in Civil War Tales, Volume 1, by Gary C. Walker. In this account, "Joseph Floyd Young of the 17th Virginia Cavalry was wounded through the eye as a bullet or shell fragment passed out through the temple. The wound was treated by pulling a silk rag through the wound channel, back and forth repeatedly to cleanse the wound in what was left of his eye socket."

Yowch. Apparently Young was unmarried at the time, marrying in 1867. Later images of him do not seem to show much damage to his eye, which seems to have healed incredibly well.


We drove slowly back to Hinton, to find, at last, a late late breakfast. As we drove we passed these roses, growing rampant and wild alongside the road. Such beauty, such stories, such memories. 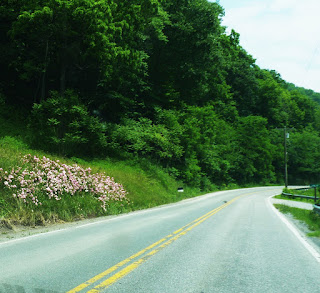 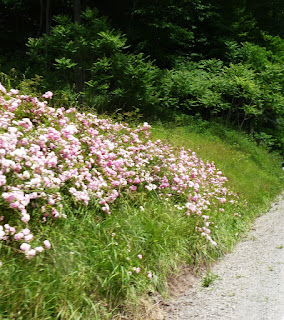