There is life outside of ghost stories, really there is, although it might not seem like it by my posts. I have been really focused on keeping on track with several different things this month, but that means spending a lot of time at home, which allows me to enjoy this special space. And that's important to my mental health for sure.

So a few fall decorations came out to freshen up the house. This little wood witch is an incense burner my son Derek brought back from Germany in 2001. The pottery dish was a gift from my oldest son and his wife; both of these are cherished and come out each year in September. 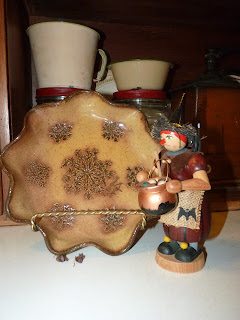 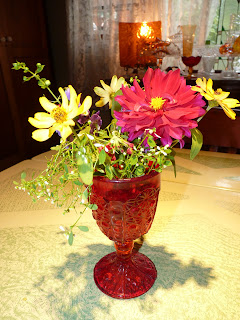 One thing I like to do is have fruit and flowers in the house. There's something comforting and homey in a bowl of fruit or a vase of garden flowers. So when I feel covered over with projects and deadlines, I make sure I stop long enough to pick some blooms for the table. 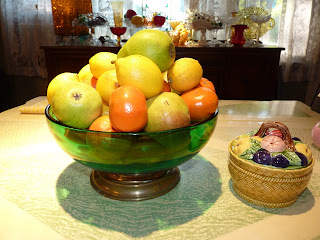 Fruit is my favorite food. I could easily eat it for every meal, so having fruit in the house is a necessity for me. At this time of year, pears, apples, tangerines and lemons are on the table.

I found this lovely green bowl recently, a steal at $3. It needed some cleaning up with Bar Keeper's Friend but now it's just perfect. I bought it to sell, and may do so...eventually. It's the perfect size for mixing up a batch of biscuits! 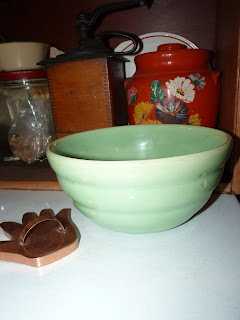 I spent a little time in the gardens the other day, gathering up the plants that needed to come inside. I've been neglecting the gardens lately--mostly because the damage from the deer has been so disheartening. They've eaten the Chrysanthemums, the live-forever, the geraniums, hydrangeas, late beans, lettuce, kale, and pretty much anything else still green out there. I've never had such a problem, but apparently the dogs have retired from deer duty.But apparently the deer don't like canna lilies. Last fall we dug them up and took the roots in the cellar. We stored them in 5-gallon buckets. Not a good idea I guess, because all the roots rotted. I was so sad to see that. 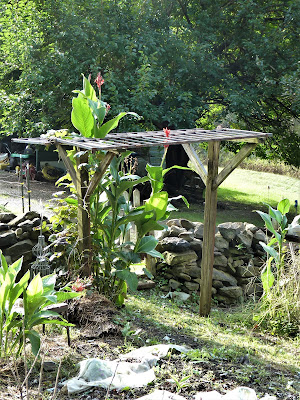 But we missed some! And the roots left in the ground survived the winter. When we tilled the garden in the spring those roots were chopped up and spread around so now we have random cannas all over the small garden. One of them really outdid itself too, growing about 8 feet tall, right through the grape arbor.

This week we restocked both Marietta and Ravenswood because I know we won't be able to get to either place next week. Both places are doing well and we've had good sales lately, always a nice thing. I cleaned up my ebay room too, got rid of about 3 totes of stuff that I never got listed or never got around to painting/fixing. It feels like a weight off my shoulders, although there is still a good bit still left to purge. I take it to a man who sells on Facebook so I get back at least part of my money. Buying and selling is a live-and-learn business and I've certainly learned a lot about what NOT to buy.

Among the stored stuff were these pieces of glass fruit. I've listed them on ebay, but we'll enjoy them until they sell. 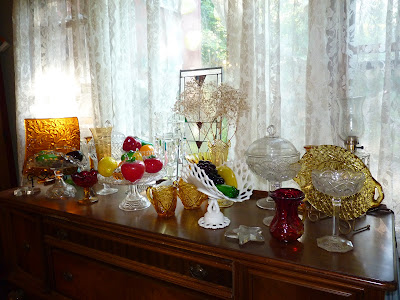 But back to ghost stories. The first ghost walk went very well; I included a lot of new stories and more history than ever before. And the day before I spent the day at Ripley Middle School, telling stories to the 8th grade English classes. I've been doing this for about 8 years and it's always a joy for me because these kids are great listeners and have stories of their own to share with me. I love that.
The photo below is of our ghost walk crew this year, minus the Confederate soldier who wasn't available at picture time. The first man on the left is the sheriff who conducted the last public hanging in West Virginia; next is the survivor of the bloody triple murder that led to the hanging; that's me in the center; then the mother of a young man who tragically died in 1906; and then my hubby Larry, who played the ghost of a preacher in the graveyard. Everyone did a great job with their parts. My job was leading the walk around to various sites in town including the Old Settlers Cemetery, and telling stories of the places along the way. At certain points the actors, members of the local acting guild, came out and told a piece of their story. The two ladies here were both librarians, like I was, and we all got our Master's degrees at the same time, going through the first-ever distance ed Master's program from the University of South Carolina. Oddly, we're all Sues--Suzy, Susanna, and Suzette. These two are my very dear friends and we get together whenever we can. 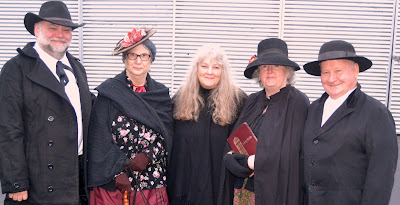 This week I've been preparing for a workshop this weekend on telling and writing ghost stories. I've been thinking a lot about it, outlining what I want to discuss, and researching to see if there might be something to add that I hadn't considered. I will be talking about documented events, personal and family passed-down experiences and how to make these into a real story, and also about creating new stories with a ghostly twist. Should be an interesting time.

I've also been busy mailing out the new CDs. Sales have been good so far, so between shippng CDs and packing and shipping ebay sales, I've kept the mailman busy. I've been working on plans for Christmas presentations too as a few have been scheduled recently.

Tonight my feet will be up! It took quite a while to restock our Ravenswood booth today, and I am tired. I'll post photos tomorrow.

So now it's movie time for me--but what will we watch? I'm waiting to see what Larry pops into the DVD player.

New comments are not allowed.