62 and raining.
I miss having honeybees. There is something completely satisfying about a busy hive nestled under a springtime tree, the hum providing the perfect music for this time of year. There are still some wild bees around our place, very likely from a swarm from our former neighbor, who gave up on his bees and left them to their own devices. We would like to have hives again, but the cost of replacement bees nowadays makes beekeeping almost a rich man's hobby, it seems. But maybe one day we will dive in again, because it just seems odd not to have a hive or two on the place. 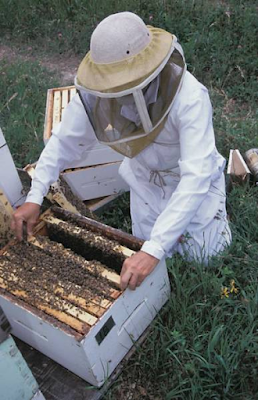 Yesterday someone said something about a thing being "the bee's knees". A funny saying, when you come to think of it. What does it mean, anyway? And where did the saying come from?
A quick google search turned up the following: "The phrase was first recorded in the late 18th century, when it was used to mean 'something very small and insignificant'. Its current meaning dates from the 1920s, at which time a whole collection of American slang expressions were coined with the meaning 'an outstanding person or thing'. Examples included the flea's eyebrows, the canary's tusks, and one that still survives – the cat's whiskers. The switch in meaning for the bee's knees  probably emerged because it was so similar in structure and pattern to these other phrases." from Lexico.com .
I have never heard the expression, "the flea's eyebrows" either, but I kinda like it--so descriptive of a tiny thing, isn't it?
Then I got to thinking of other sayings about bees. We all know sweet as honey, of course, and it's self-explanatory, and about how some cultures go out to tell the bees when someone has passed away. But how about the one that says if a bee enters your home, a visitor is coming? Or if a bee lands on your hand, that's good luck? There are plenty of others, such as:
Using bad language around the bees will get you stung. Similarly, you should never argue around bees. These make sense to me, as animals, and probably bees, can sense the change in atmosphere when someone is angry or scared. Maybe we put off a certain scent, or pheromones, when we're angry.
Bees should be told when someone dies, marries, or another important event occurs. They should also be introduced if they get a new beekeeper.
If a bee comes in the house, don't try to force it out. Just leave a window or door open so it can leave on its own.
A bee landing on your hand means money is coming to you, and a bee on your head means great success is in your future. 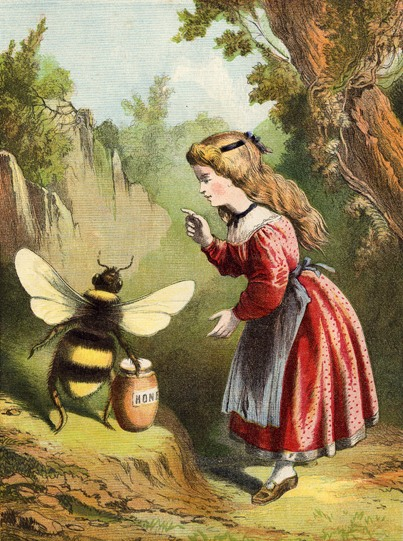 image from wikimedia
The name Melissa comes from the Greek, and means "honeybee". I know several ladies named Melissa, and I wonder if they know this little fact. The name Deborah also means "bee".
Bees are considered symbols of loyalty and diligence. Which makes me think of the expressions "working like a bee" and "busy as a bee".
Most of us have heard that "A swarm of bees in May is worth a load of hay, a swarm in June iss worth a silver spoon, but a swarm in July is not worth a fly". This is because the bees will not have time to make enough honey to survive the winter if they swarm in July. Of course, in warmer climates, this old saw doesn't really hold true.
This old proverb really gets to the point, doesn't it? Words are like bees – some create honey
and others leave a sting. And an old Arab proverb says, "When you shoot an arrow of truth,
dip its point in honey."
So with all of that, I'll buzz off for today, leaving you with this, one of my favorite songs by Judy Collins:
Copyright Susanna Holstein. All rights reserved. No Republication or Redistribution Allowed without attribution to Susanna Holstein.
Posted by Granny Sue at 5/26/2022 11:57:00 AM