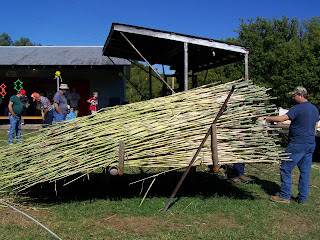 Once we used to make molasses ourselves, but jobs and sons growing up ended it for us. So it was a trip back in time Saturday at Arnoldsburg, where molasses is still made the old-time way.

In this part of West Virginia, sorghum was the staple sweetener for many years. It was easy to grow and each farmer could grow a year's supply with a little effort. Refined sugar was a scarce and treasured treat, but molasses could be used for baking, cooking and just about anything else that sugar was used for. Of course, cooks had to know how to adjust recipes to accommodate the liquidity and strong flavor of sorghum (still, it is much lighter than blackstrap molasses, which is made with sugar cane). 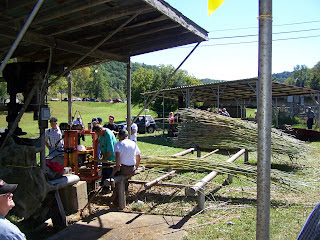 First, you have to have cane, lots of it. Sorghum is grown like corn, and looks very like it in the field, but the tassles are full-seeded and brown. About two weeks before cooking, all the blades (leaves) on each plant must be stripped. Since it takes a lot of cane to make a gallon, we used to grow about 2 acres and could expect about 60 gallons of syrup, if my memory is right. The cane is left to ripen for a couple weeks before it is cut down with corn knives, piled on wagons and taken to the cane mill. In old times, the cane mill moved from community to community, setting up on a good site; people hauled their cane in to cook, and had a right good time in the process. The mill owner/cook kept part of the syrup as payment. When we were cooking, we took 1/2 of the syrup. It sold for $20-30 a gallon then; now it's $40/gallon. 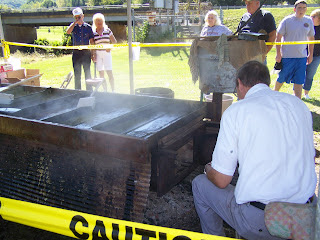 You need equipment, too.
This is the pan, which is heated with wood. It looks similar to the maple syrup evaporator. The sections are further divided by little ridges that help the syrup move from one end to the other as it cooks. A good cook knows exactly how much wood to add to keep a good, hot, even heat under the syrup. 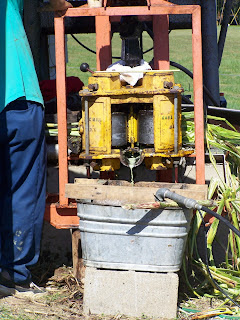 You also need a mill to press the sap out of the cane. The cane is fed between rollers and the juice strained into a catchbasin. It's then hauled to the pan and added to the cooking syrup at the far end of the pan, where the heat is coolest. As it moves up the pan, the syrup thickens and foams. The foam is skimmed off with a skimmer and discarded. The syrup is also stirred regularly to keep it from sticking, a disaster that causes the whole process to stop, the cooking syrup discarded and the pan scrubbed before it can be started up again. A real mess, and one I was lucky enough to avoid in my cooking days.
One thing I love is the smell of the cooking molasses. I can't describe it, and I wish there was some way to capture that incredible odor like a photo. I inhaled so much Saturday I thought I'd hyperventilate. 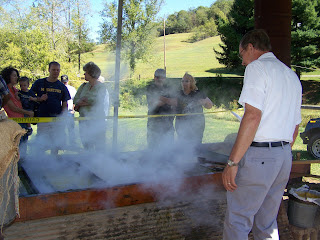 Here the cook is stirring and skimming, and the rising steam indicates the amount of liquid being cooked out of the syrup. It's a hot job, and careful attention has to be paid the entire time. 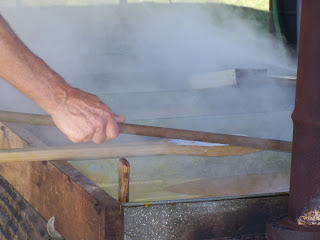 This run is almost ready to drain off. See the wood peg in the lower front of the pan? That's where the finished syrup will be drained into jars. How to tell when it's done? I used to put a little on a plate and blow it cool. If it was nice and thick and a good color, it was ready. I'd also watch how it would "string" from the stirring paddle. A long unbroken string meant it was ready. Not everyone could cook it or tell when it was done. I was lucky enough to have the knack--or maybe not, since it meant I was stuck with cooking from 8am til it was too dark to see on cooking days! At the end of cooking off a field of cane, water would be added to the pan to follow the last of the syrup through. This kept the pan from scorching. 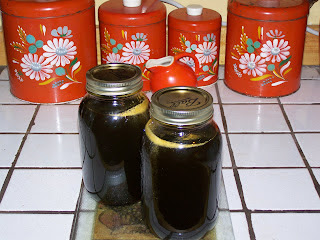 Ah! The finished product--two quarts of good, sweet sorghums (referred to in these parts in the plural, which always surprises me).

Now, how do you eat it? I use it to make molasses cookies and gingerbread, and put it in my fried apples. Many people also make toffee apples with it, and other candies.

The best way is to make biscuits. Then take a spoonful of butter and a spoonful of sorghum and mash it together til smooth. Spread it on a hot biscuit. It's a taste that's hard to describe--not everyone likes it, but if you do, you will hanker for it every fall when it's time for molasses making again.