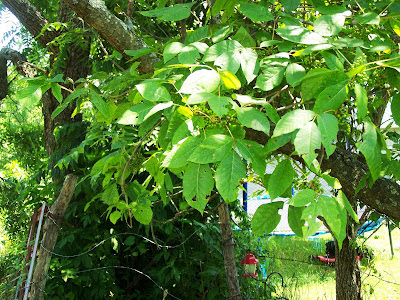 One of my sons has some prizewinning poison ivy at his house. Some of it has trunks like trees, no kidding. He's working on eradicating it, but it's no easy task.
Over the years I've learned a few remedies for poison ivy that work for me, and others that seem to work for those who've tried them:

1. Homemade lye soap was recommended to me by a doctor in the 1970's. According to the FDA, what makes you itch when you come into contact with poison ivy is the chemical urushiol, which is easily spread on contact. Lye soap can strip usushiol from your skin and stop the spread of the itch. It definitely helped me recover from a bad bout of winter poison ivy I apparently contracted from the smoke for logs twined with the stuff that we were burning in a brush pile. 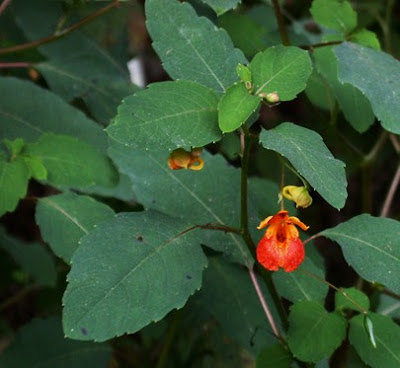 2. Jewelweed, also known as wild Touch-Me-Not (and related to the garden flower Impatiens) has a gel in its stem similar to that of Aloe. My neighbors told me when I moved here that breaking open the stem of jewelweed and spreading the gooey get on poison ivy will stop the itch.

A few years ago I was on a nature hike when someone in the group came in contact with nettles. The stinging was driving her crazy so I suggested jewelweed as a possible antidote. She tried it and it worked like magic. I have used jewelweed on bug bites and poison ivy and it works for me.

3. Bleach applied directly to poison ivy has been recommended to me by several people. I haven't tried it so I can't attest to its efficacy, but it seems like a reasonable idea given the ability of bleach to strip oil and grease from surfaces. There are many conflicting opinions online about this and almost any remedy for poison ivy, however.

4. My mother mixed baking soda with water to make a paste that we applied to the itchy spots. It seemed to help with the itching, as I remember, but the good effects wore off as soon as the paste dried. Still it could be a stopgap until something more effective can be obtained.
For an extensive list of folk remedies for poison ivy, look at Health 911.