I am listening to the wind moan at my windows tonight and the clouds shuffle like sheep in a stampede across a leaden plain. In the graveyard on the hill, leaves rattle against tombstones, dry reminders of what once was fresh and green. It’s a perfect night for a ghost story, so I will tell you one.

My mother and father were married in Cambridge, England, on January 11, 1945. The war was still raging, the Battle of Britain was still being fought and air raid warnings were a commonplace occurrence. They were in love and even though their parents on both sides of the Atlantic expressed misgivings they were determined to wed. Their wedding day was cold and snowy and their witnesses could not get to the church so a couple of strangers passing by were pressed into service.

Housing was at a premium in England in those times. Although they searched hard, they found only one possible place to rent--a third-floor walkup to a one-room rental in a house where several other servicemen and their wives were living, in a little village called Royston. 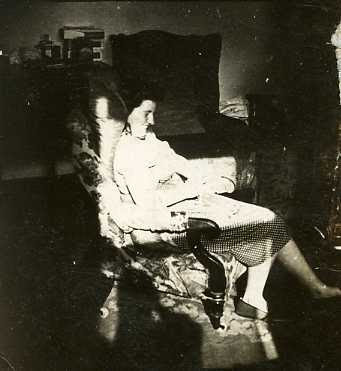 Mom at the Royston flat

Mom told me a little about the time that she and Dad lived in the Royston house. At first it was a fun place to be--there were other wives there to gossip with and when the husbands were home it was quite a party place. Gradually, however, she began to notice that not everything was as nice as she had thought.

For one thing, some of the young women who lived in the house were bringing in other men when their husbands were away. Some of the women had children and Mom would be asked to babysit for them. She sometimes did so, but soon she found that she too was expecting, and didn't feel well enough to watch other children--and she didn't approve of the activities of the more "social" wives.


It was after she learned she was pregnant that she began to notice some odd things. Like the feeling of someone watching her, or a rocker moving when no one was seated in it. She heard footsteps moving in the hall outside her door, but if she looked out no one was there. The feeling of something sinister grew stronger and stronger, although there was nothing she could identify as the source of the feeling--it was as though the room itself harbored a malevolence that could be felt in the very air in the room.


One day while she was alone she pulled one of her dresses from the closet and saw that it had been cut, ruined. Another day, she told me, a knife whizzed across the room, inches from her face. It stuck in the window frame, but when she walked over to look at it, the knife was gone. The footsteps in the hall continued, and finally she and Dad decided to see who it was. 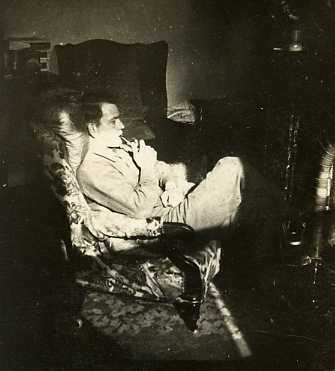 Dad at the Royston flat

They had a plan. Dad would crouch by the door, ready to pull it open when the footsteps passed on the landing outside their door. Mom would turn on the light at the same time and they would be able to see who was going up to the supposedly unoccupied attic.


They waited. The clock moved slowly towards midnight. Then they heard the unmistakable creak of the stairs. Someone was coming up, very slowly. They waited, barely breathing. The footsteps came closer and closer, and finally they were on the landing outside the door.

"Now!" Dad shouted as he jerked open the door. Mom switched on the light and they stared out at the landing.


There was nothing there. Nothing. But the footsteps continued up the stairs to the attic.

Mom miscarried soon afterwards. She blamed the miscarriage on the terror she felt living in that house. They moved out within a few weeks of the miscarriage.

My parents were very commonsense, down-to-earth people with little patience for ghost stories. But they were adamant about the details of their own experience, and when they spoke of it, it was always with a sense of puzzlement and dread.
Posted by Granny Sue at 10/31/2008 06:45:00 AM