59 again, cloudy and chilly. I am loving this weather, and it looks like it will be with us for several more days. Larry is watering the new fruit trees, though, so I am sure he'd like to see a good rain.
We put up beans again the other day, nice young Tenderette bush beans, which are my favorite as far as growing and taste. In this area, the white half-runners are queen; they are what almost everyone else grows, followed by Blue Lake. I'm not a fan of either. The half-runners have to be strung, and I don't like the taste of Blue Lake beans. Most people here cook their half-runners almost to a mush, usually adding bacon or ham and maybe onions. They're tasty, but to me seem like all the life and nutrition is cooked out of them. Of course, probably that's true of most canned green beans, but the Tenderettes retain some firmness. Since I don't like frozen beans--and as I said yesterday, they tend to go to waste because I forget about them being in the freezer--then canning is the only option.
So pretty for late beans. We had similar good luck last year with beans planted at the beginning of August. 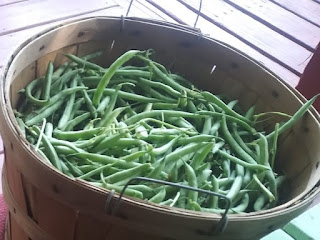 Well, canning or freezing are not the only options. There's leather britches, which are green beans strung up and dried. I tried them once for Larry's sake, because he had fond memories of them from his childhood. But all I can say is yuck. Maybe I cooked them wrong, but to me if it hadn't been for the hambone and onions I cooked them with, there'd have been no flavor to them at all. And they took a long, long time to cook. Here in this photo, I was soaking them prior to cooking. 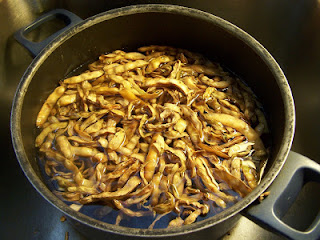 It seems like every time we snap beans--a benefit of Tenderettes, no strings--we start talking about our childhoods, and memories of beans and gardens from those days. For both of us, bean-picking and snapping or stringing was relegated to the children. Both our fathers were the gardeners, our mothers were the preservers and we were the labor in between planting and canning. Back then, pretty much everyone grew half-runners, so the beans always needed to be strung. Half-runners live up to their name: the vines string out, not quite bush beans but not as tall as pole beans. Most people put up string for the beans to climb on but invariably the string would sag, and the beans were a tangle work through. Larry's father also grew pole beans, and I think our Dad might have done that a few times too, but our garden space was limited and pole beans take a lot of space. At one time the garden took up almost all of the back yard, but over the years it shrank in size so we had space to play ball and for Dad to build a little cookout grill from stacked cinderblocks and a grill from an old stove. It worked great. 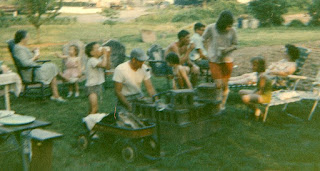 Dad's cookout grill and the back yard. This picture was taken in 1965, and as you can see the garden, behind Mom, had gotten pretty small by then. That's me standing, and to the left and seated is my English Granny, who must have been visiting. Julie is talking to her, John is drinking from a cup, Joe and Tom are seated behind me, talking to Mom on the chaise, and Cathy is to my right. Mom looks pretty good here for a lady with 13 children.
Dad also built a picnic table, and that is where we would sit to snap beans, there or on the front porch. It seemed a shame to have to spend long summer afternoons at this chore, so there was plenty of grousing and bickering, but a lot of laughter and fun too.  We'd get in trouble with Mom if we left too many strings or missed beans with bad places in them. Back then, most people put up their beans using a water bath canner, boiling the jars for 3 hours. The kitchen would be a steam bath, and the rest of the house felt the effects too. Pressure canners were just coming into use, but Mom, like most other women, didn't trust the new canners and were afraid of them blowing up. A shame, that. They could have avoided hours of heat, but the new canners also cost a good bit so that was another deterrent.
Larry's memories are similar to mine. His father grew large gardens up on a hill, which required water being carried up at planting time. There was usually more than his family could use, and they would share produce with their neighbors. His mother processed her beans a bit differently. She boiled a large  washtub of water over an outside fire. The jars of beans were put in the washtub with towels between them to keep them from breaking, and boiled for hours. Although it might have been more work to set this up, it seems to me a better way than heating up the whole house during processing. But neither method really assured that bacteria would be killed, as some bacteria need higher temperatures than 212 degrees, the temperature of boiling water, to be killed off, no matter how long the jars were boiled.
We're lucky today. We have safer pressure canners, and many of us enjoy air conditioned kitchens. But the picking and snapping processes haven't changed, and just as when we were children, we talk and laugh and "remember when."
Copyright Susanna Holstein. All rights reserved. No Republication or Redistribution Allowed without attribution to Susanna Holstein.
Posted by Granny Sue at 9/18/2020 08:49:00 AM