59 this morning and cloudy with showers threatening although they never materialized. A nice day, highest was about 75. I learned that the haze we've been experiencing is the smoke from the fires on the West Coast. How strange, and how sad. In some way it makes me feel connected to all the people affected by the flames.
It's 8:30 in the evening as I write, and I am finally finished for the day. It was, as always, a busy one: ebay listings in the morning while Larry took care of his morning routine--chickens, dogs, cat, gardens--then we got together to clean out the freezer. It's been a couple years since we tackled it and it was in need of some serious attention. And of course we found a lot of things that needed to be disposed of. I also took some lessons from this cleanout--never again will I freeze peaches or green beans, because I forgot they were up there.
The beans were freezer burnt and had to be tossed. The peaches I thawed and made into jam this evening. In future all beans and peaches will be canned, because that's what I have always done. I froze the peaches last year when I read about how good frozen peaches are; but one has to remember to use them, right? The green beans, I have no idea, but probably they were the leftovers from batches that were snapped for canning, but weren't enough to bother with. Again, I would have to remember they were in the freezer and use them.
Another never-freeze-again: pumpkin. I put up a LOT of it two years ago, apparently, and promptly forgot about it. Lesson learned.
The upside is that I now know what's up there, and what space we have. Which isn't a lot, actually, with a hog due for butchering in October or November and deer season coming in November too. So we may be on the lookout for an additional freezer.
After the freezer work, I had another project to do, making mincemeat. It's been 3 or 4 years since I made it and I tossed out the leftover jars in the cellar in the spring. I do love mincemeat, although I know it's not everyone's cup of tea. Homemade is nothing like the storebought, though, and I bet most people who think they don't like it might change their mind if they ever tasted the real thing. I make green tomato mincemeat, which uses green tomatoes, apples, a few lemons and oranges, raisins, cinnamon, nutmeg, ginger, cloves, brown sugar, canola oil and cider vinegar--I think that's all. Last time I made it I also used ground meat, and some people use ground suet. I substituted the canola oil for the meat. Other people also add nuts, sultanas, currants and candied fruit; I added dried cranberries this time.
Green tomatoes are so pretty, aren't they? 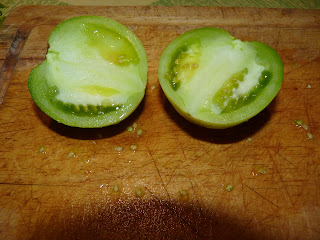 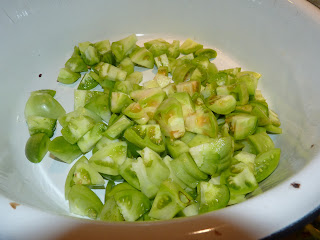 Cut up apples from our tree, raisins, cranberries, oranges, and lemon get added to the tomatoes. 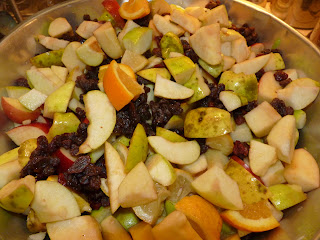 Then it all goes through the food processor. 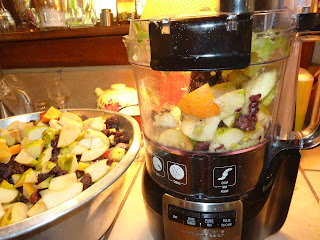 Spices, brown sugar, cider vinegar and oil are added, then all of it is cooked for an hour and half. It turns a rich brown and gets pretty thick. 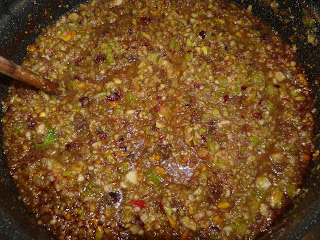 My old Tappan stove gets a workout every day this time of year. Every burner in use: water in the kettle back left burner for sterilizing jars, peach jam on the front left, mincemeat front right and jar lids heating up in boiling water back right. 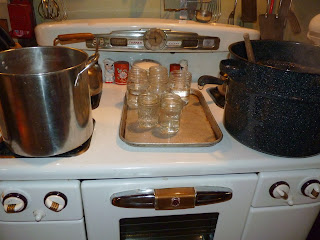 I don't really measure anything for the mincemeat, just make sure that the bulk is apples and green tomatoes. This batch is absolutely delicious and worth all the work. All the fruits and raisins are chopped up in the food processor; I won't lie, it takes a while to make. I started at 3:00pm and the last load just came out of the water bath canner. But I can't explain the sense of accomplishment when it's done. And the house smells heavenly.
I made the peach jam while the mincemeat was cooking, making sure to keep the mincemeat stirred and occasionally feeling like a one-armed sailor, but everything went well, especially after Larry came in and helped with washing jars and stirring. I also had a pork loin roast--a freezer find--in the crockpot, covered with some frozen apple pie filling. Both needed using up, and the roast came out absolutely delicious. A trick to remember for the future.
It is the time of year when almost every day something needs to be put up. Yesterday I processed the sauerkraut, made more pasta sauce and made a small batch of banana peppers in tomato sauce. Tomorrow we have to go to our booth in Ravenswood, but Saturday I'll be making salsa and dehydrating peppers. The harvest season is really upon us.
I listened to the radio while I worked today, and heard an interview with actress Susan Sarandon about her new movie, Blackbird. The movie is about a woman with ALS who decides to end her life on her own terms, with the assistance of her husband. She invites all of her children and their families to come for the weekend, at the end of which she will end her life. I could not help but be horrified by the premise of the movie. What mother would inflict such a weekend on her family? Is it as manipulative as it sounds to me? I understand her decision to end her life, but not having her children there to act like everything is normal, just a family weekend, when they know what her plans are. If you see this movie, I'd really like to know what you think of it.
Mincemeat is an old, old method of food preservation, dating back to the pre-refrigeration days. The earliest recipes seem to be from at least 500 years ago, and are very little like what I make. Shakespeare even referred to it in one of his plays. Mincemeat was literally minced--chopped--meat with spices and a preservative liquid, probably alcohol of some sort, and was a good way to keep meat for long periods. It was probably stored in a crock or stone jar in a cool place. I have read the mixture was allowed to ferment before being consumed. I have to admit, that does not sound good to me. Today's commercially-prepared mincemeat probably contains little, if any meat, and is likely somewhat similar to my homemade version.
To read more about the history of this ages-old treat, check out these sources:
Smithsonian Magazine
Wikipedia
What's Cooking America
Why Christmas
BBC.com
History.com
Copyright Susanna Holstein. All rights reserved. No Republication or Redistribution Allowed without attribution to Susanna Holstein.
Posted by Granny Sue at 9/17/2020 09:36:00 PM