The days have been so similar all week they blur into each other. Generally around 59 in the mornings, warming into the 70's, with a mix of cloud and sun. No rain for over 2 weeks, and everything is so dry.
So today I finally got a chance to actually get into the garden. You'd think with all the canning and so forth that I've been doing that I'd have been out there daily, but no. I spend mornings getting the house in order and taking care of ebay, then afternoons canning. That's been my life, or so it seems, for most of this month. We have had some breaks, of course. This past week I spent a lot of time on furniture projects, getting things ready for our booths. And Larry worked on brush-hogging and replacing the roof on an old shed with tin that's probably way older than the shed, but still serviceable.
But back to the garden. For this late in the season, we are still harvesting a lot of different vegetables. Tomatoes, squash, a few cucumbers from the new vines--although the vines are not doing very well, and look like they might have some sort of blight. We're also getting some melons, many peppers, 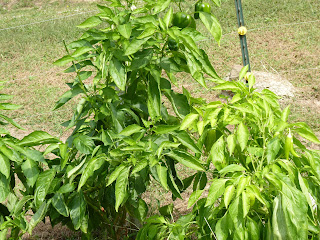 and kale and radishes. 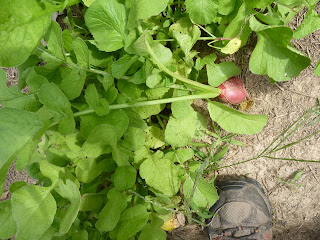 The late cabbage is about ready for harvest, and Larry picked corn from our last planting, which we put in about the first week of August. Today I canned the last of the late green beans, which gave us three good pickings and about 20 quarts of canned beans plus plenty to eat.
The garden looks ragged but even though it's not pretty, it's still doing well. Turnips--which I thought was the lettuce I'd planted, are growing well, 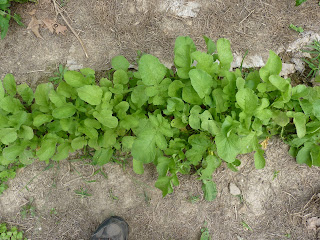 and there are some tiny beet plants that need rain to get growing. No lettuce. I guess this dry weather did in my little seedlings, but I do have these plants below, given to me by a friend, that are looking good, so I'm hopeful. If the deer don't get them. Last night they ate my live-forever, almost all it of it, some begonias and even a rosemary plant that was right by the front steps. Nervy, I'll say that for them. I think I'll put a net over them tomorrow. 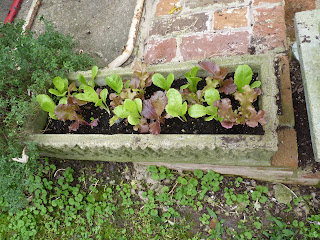 Most of the tomato plants have blight but they're hanging on. We did pull a few that were too far gone.
There is one tomato plant, a volunteer, that is just amazing. It came up in the onion row, and we left it to grow there. Then when we pulled the onions and planted beans, we still left the tomato in place. Now it is producing tomatoes like crazy, with very little sign of blight. I have one of its fruits set aside, and will be saving those seeds. And we're thinking that maybe we should plant tomatoes in amongst the beans next year. 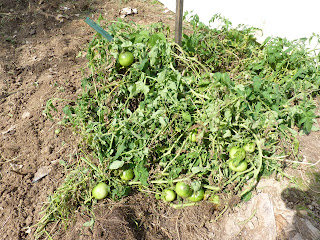 The original zucchini plants are still bearing and the plant looks fairly healthy. We only planted one hill of zucchini but it's done very well. 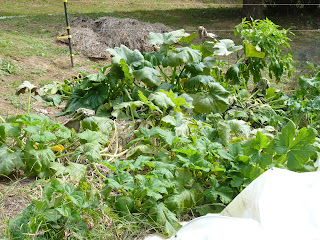 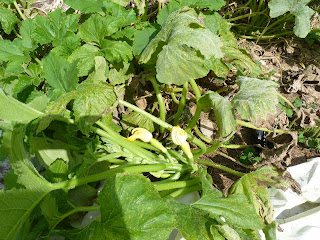 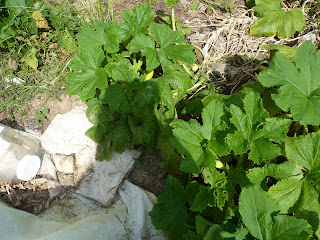 The late broccoli looks good, and I am hoping it starts to head soon. We'll cut the late cabbage this week and make a bit more kraut. 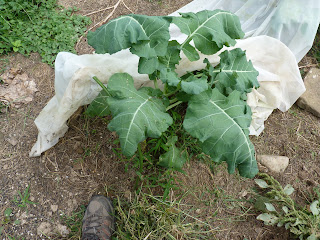 My poor leeks did not do well this year. I guess they didn't like their spot. And now the weeds are all around them. I'll clean them up this week, pull the mulch closer, and hope they get a growth spurt this month. There's still time for them to grow. 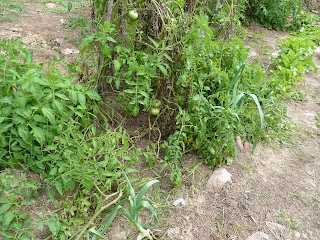 A couple weeks ago I braved Wal-Mart to get some mums. Some things are just worth the risk you know? The poor petunias were looking ragged, so these freshened things up a bit. 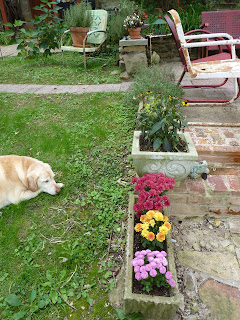 Here I cut back the lilies-of-the-valley, dug some out and mailed them to a friend, and planted more mums. 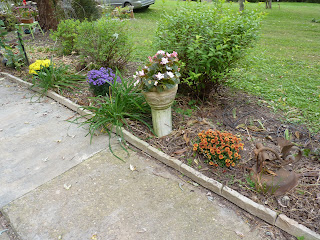 We have never had a garden still producing this well so late in the season, and it looks like we'll have some fresh eating for quite a while unless we get a hard freeze. This is the first year we've really kept up with succession planting, and the mulch we put down in the spring has keep the weeds down pretty well and kept the ground moist even in this dry weather. Of course, we're already thinking about next year. What can we do differently/ better? What plant varieties should we plant? Should we get a bigger greenhouse? Definitely be on the lookout for more canning jars. And absolutely buy lids in bulk again.
I really liked starting our own plants. I used to do it until ten years ago or so, but just got away from it. Seemed like a lot of work when we only needed a few of each kind of plant. But I've missed it, and I honestly think our plants did much better than the "boughten" ones. I've also been saving some flower seeds, and will gather herbs and some other seeds to save too. It's been years since I did that, but it just seems logical and this year I will have time to do it.
Copyright Susanna Holstein. All rights reserved. No Republication or Redistribution Allowed without attribution to Susanna Holstein.
Posted by Granny Sue at 9/27/2020 09:13:00 PM