58 and clear this morning. Well, hazy actually. Lovely weather, low humidity, temps in the 70s.
I picked a pretty bouquet this morning while working in the flowerbeds. A mix of garden and wildflowers, in a teapot I love that has no lid. 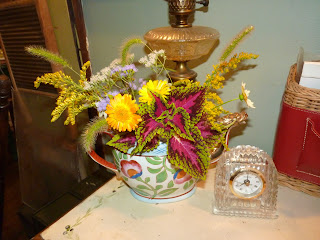 So, fighting back against the henhouse marauder. Whatever killed our baby chicks has not returned; Larry went over the coop carefully, and fixed a door that might have been a point of entry as a cunning raccoon could have opened it. I've got another plan that may or may not work: 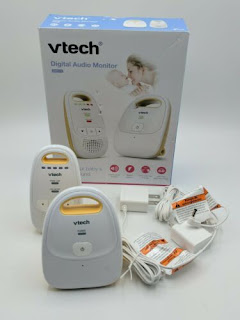 A baby monitor. This one says it has a range of up to 1500 feet. It's probably no more than 200-300 feet to the chicken house, so maybe the monitor will work? What do you think?
Sending my prayers to any of you in the path of Hurricane Sally. Apparently she landed on the Alabama coast and although not a giant hurricane still caused much damage.
I've experience two hurricanes in my life. The first one I remember vividly, even though I was just a little over three years old. That was Hurricane Hazel, and to a child it was an exciting adventure. We were living in the little house my father had built in Centreville, Virginia, on a plot of land surrounded by tall pines. I remember the trees swaying and bending until they almost touched the ground, and huge hail--one of them filled my little hand. It was a wonder to me. Of course we were not allowed outside until the wind died down and we were in the "eye" of the storm. The term fascinated me; I kept peering up at the sky looking for a giant eye, but there was none to be seen.
We picked up the hail and sucked on it. It tasted a little salty, surprisingly. Inside, the electricity was off, of course, and my mother had the kerosene lamp lit. Dad wasn't home--he was an electrical lineman in those days and was probably at work when the storm hit in the middle of the day. We didn't have the kind of storm warnings in those days that we have now. I remember the sense of excitement in the air as neighbors came out and called to each other during the eye; I don't remember fear but I am sure my mother was doing her best not to show that she was frightened. Was my Granny visiting from England then? I'm not sure, but I think she might have been since she was with us for an extended visit at some point during this time period. If she was, she would certainly have contributed to keeping everyone calm, because that's just how she was.
Dad, during those early 1950's. I believe that when this photo was taken he was still working for Fones Electric Company. 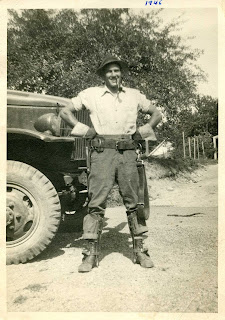 The second hurricane I remember was Hurricane Agnes. By the time it reached Northern Virginia I suppose it was a tropical storm, but it was violent, dumping many inches of rain and with strong winds that bent the huge oaks around my little home almost to the ground. I was married, with three little ones when this storm struck on my 21st birthday, June 21, 1972. My little house in Virginia was built about 1940 by a man who'd worked for the CCC. It was log although someone stuccoed over them on the outside, and it was as sturdy as can be, never moving in any wind. My husband was not home at the time of the storm, being away for his 2-week Air Force Reserve summer training. So my little boys and I hunkered down on the first floor of our house because I was afraid one of the big trees would crash on the roof.
By morning, the power was out of course, and there was flooding everywhere. A dam had broken in one area and many homes were damaged. Our house was on a rise above the Occoquan River, and the river had risen many, many feet, covering the bridge and coming up the ravine behind our house to within about 100 feet of us. We were not in danger, as there was a steep incline, but I would never have dreamed of the river coming so far up. It was incredibly wide and raging. Somehow, by taking many back roads, my husband made it home a day later. The day after that we volunteered to help with flood cleanup while my mother watched our little boys. I would have gone back day after day but my mom said my first duty was to my little boys, and my husband worried about me since our youngest son was only a few weeks old and I was breastfeeding. But I will never forget the devastation I saw, and did not know then that when I moved to West Virginia I'd see similar sights many times. I learned from Hurricane Agnes to never live too close to water.
Copyright Susanna Holstein. All rights reserved. No Republication or Redistribution Allowed without attribution to Susanna Holstein.
Posted by Granny Sue at 9/16/2020 09:29:00 PM